Program of the Festival 2019

OPENING OF THE FESTIVAL

19:00: OPENING OF THE FESTIVAL EXHIBITIONS

GUESTS OF THE FESTIVAL:

140 YEARS SINCE THE LAUNCH OF ŠALJIVI ASTRONOM MAGAZINE

115 YEARS SINCE THE BIRTH OF BRANISLAV – BRANKO VIDIĆ

110 YEARS SINCE THE BIRTH OF ĐORĐE LOBAČEV

80 SINCE THE LAUNCH OF ZIGOMAR COMICS

80 YEARS SINCE THE LAUNCH OF VREME STRIP MAGAZINE

55 YEARS SINCE THE LAUNCH OF EDITION LALE

50 YEARS OF THE COMICS MAGAZINE STRIPOTEKA

45 YEARS OF PEGAZ, THE MAGAZINE FOR COMICS THEORY

International comics festival is the festival of the ninth art, organized and led since its beginnings in 2003 by the Happy Gallery of Student Cultural Center (SKC) Belgrade, as a part of its regular program. The festival is a non-profit event; it represents the largest and the most comprehensive comics project in Serbia and one of the most important meetings in the field of the ninth art in the region.

In the best tradition of its brilliant historical experiences and in precisely provided program space, for the past 17 years the International Comics Festival of the SKC is being held with exceptional successes. It is conceptually based on the international competition of authors of all ages from all countries of the world, presence of the most relevant comics artists worldwide, re-evaluation of domestic comics scene from its beginnings to the present, affirmation of the domestic comics publishing and young artists, and popularization of comics and related expressions, such as animated film and illustrations.

In 2019, 17th installment of the festival brings new exclusive masterpieces in the domain of ninth art, illustration and animated film, which is attested by the guest pool and the festival awards.

A decade after he was awarded with the Special award for the general contribution to the Serbian comics in 2009, r.m.Guéra, one of the most famous artists and illustrators, is again the guest of the festival. A fact that no less than nine Guéra's albums are present in the market in Serbian language, or are being prepared for publication by three biggest domestic comics publishers, is just one of the motives for his appearance at the Festival.

Taking into account enormous popularity of this artist (who lives in Barcelona since 1991) in Serbia an abroad, the visitors will enjoy the opportunity to get acquainted with his masterpiece opus and to meet him during the festival at the masterclass talk Evening with r.m.Guéra. As it is well known, he is an artist whose comics and illustrations have been published both in Europe and in the USA, and who collaborated with Quentin Tarantino, initially at the short episode of Inglourious Basterds for Playboy and afterwards on the complete graphic novel Django Unchained.

Vistiors of this year's festival will also have the unique opportunity to see and to meet Nedeljko Dragić, one of the greatest living authors of the Golden Age of the Zagreb School of Animation who, since 1991, lives in Munich. His exhibition is edited by Veljko Krulčić, author of the project, and his presentation and screening of his films by Andrijana Ružić. Dragić is a a cineaste who was at a stone’s throw to win the most important professional recognition in the world – the statue of Oscar. Namely, his film Tup-Tup  was nominated for Oscar in the category of best animated short film in 1972, and in the next year Dragić became a member of the Motion Picture Academy. He is also a brilliant cartoonist and illustrator, the excellent graphic designer, the author of Zagi - mascot of the 1987 Summer Universiade in Zagreb, as well as one of the artists that worked on the visual motives of the 1984 Winter Olympics in Sarajevo.

A retrospective exhibition of GETO, one of most prolific and celebrated Serbian illustrators, edited by art historian Marija Ristić, is a unique event on the domestic art scene in the domain of illustration.

French script writer Olivier Dobremel (a.k.a. DOBBS), who is sought-after by many Serbian artists is, after two years, again the guest of the festival. This time, his appearance is motivated by the Serbian edition of his works, published by a newly launched 300 ČUDA COMICS Publishing house. It is an ambitious start of this publisher and a great collection of novels by H. G. Wells, adapted by Dobbs, which includes The Time Machine, The War of the Worlds, The Invisible Man and The Island of Doctor Moreau.

The Award for General contribution to the Serbian comics goest this year to Ljubomir Kljakić, who was a longtime editor and publisher in some of the most important redactions of Yugoslav cultural centers and publishing houses. He is a comics author and theorist, and was also an editor of the first professional comics exhibition in Yugoslavia, titled Fantasy – Comics – Society, organized in February 1977 in our house – Student Cultural Center, Belgrade. Documentary exhibition and the talks with the laureate of the award is prepared by Slobodan Ivkov, art historian and leading Serbian comics theorist.

The official program of the Festival will take place from September 26th  to September 29th, 2019 in all spaces of the Student Cultural Center. All programs are free and profiled for visitors of all ages.

Miki Pješčić, editor of the festival

16:00, Main Hall: THE STORY ABOUT OUR IL GRANDE BLACK OR THE STORY ABOUT BLACK’S ONESHOTS I & II, Cultural Center Niš & Association of Comics fans „Branko Plavšić“, Niš, 2019, album launch. Speakers: Zoran Nikolić, editor of the album and chairman of the Association; Srđan Savić, director of Cultural Center Niš and Milan Ilić, graphic editor of the album

18:00, Main Hall:  SPECIAL AWARD OF THE FESTIVAL FOR GENERAL CONTRIBUTION TO THE SERBIAN COMICS 2019: Ljubomir KLJAKIĆ, talk with the laureate; moderator: Slobodan IVKOV

17:00, Main Hall: AWARD OF THE FESTVAL FOR BEST PUBLISHER OF FOREIGN EDITIONS IN SERBIA 2018/19: ČAROBNA KNJIGA, Belgrade, promotion of the publisher

18:00, Main Hall: EVENING WITH r.m. Guéra (RS/ES)– INTRODUCING THE GUEST OF THE FESTIVAL / TALKS WITH THE ARTIST / ALBUM SIGNING

(International Comics Festival reserves the right to modify the program)

This email address is being protected from spambots. You need JavaScript enabled to view it. 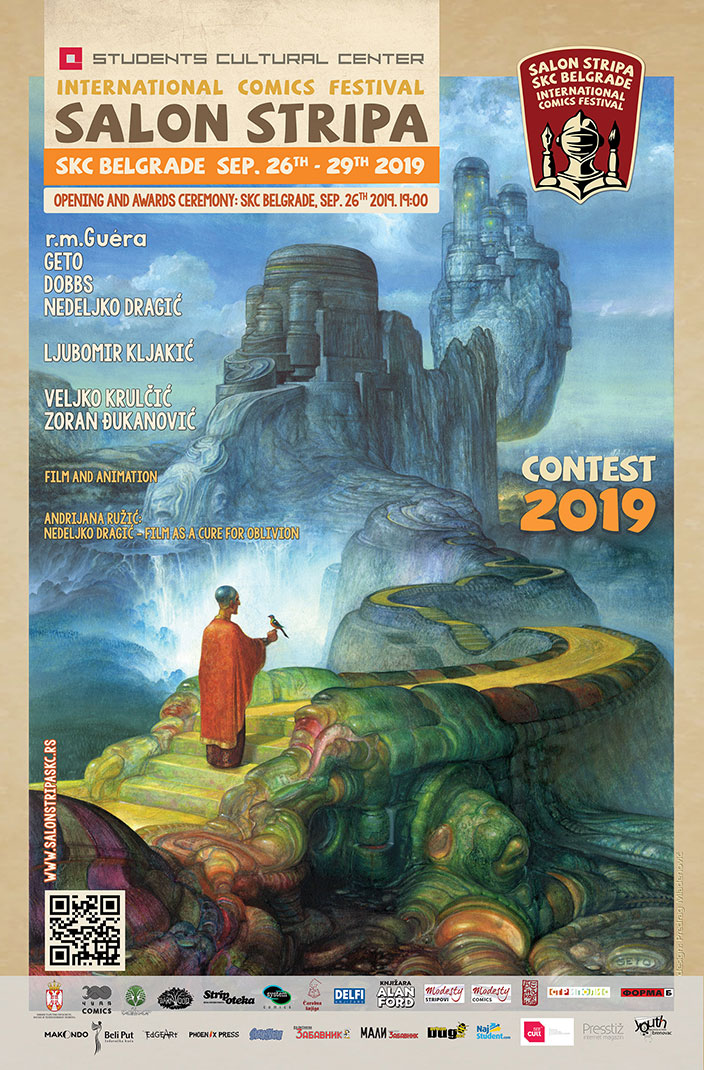